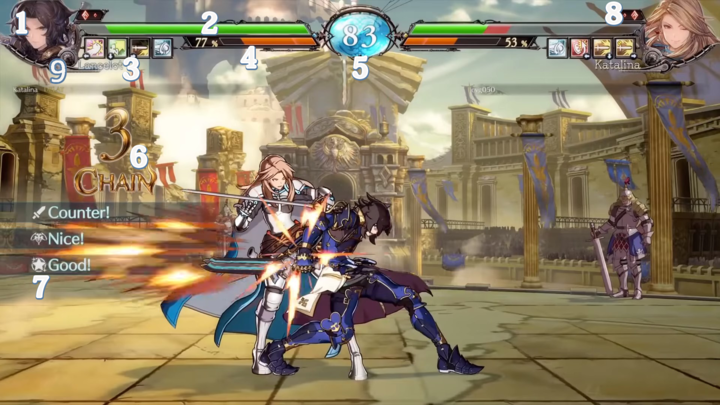 The portrait of the current character in play. Player 1 (1P) side is on the left, and Player 2 (2P) is on the right.

This gauge displays how much health each player has out of their maximum health. If your life drops below 30% of the Life, your remaining life will turn red. However, if you have 100% SB Gauge, you can access to a powerful Super Skybound Art, and your health bar will turn blue in this case. When a player's health bar is completely depleted, that player loses.

These meters indicate the current cooldown status of a character's special moves. When a special move is used, the gauge corresponding to that move will turn gray and will then proceed to fill with color from bottom to top. The filling of the gauge indicates how the cooldown timer counting down. When the gauge is completely filled again, the special move will become usable again.

Each round has a set time limit. If the timer reaches zero, then the character with the most life calculated by percentage is the winner of the round. If both players have equal health, the round is declared a draw.

This counter tracks the number of hits in a given combo.

GBVS will display messages on screen which describe the properties of the action taken by a given player. Messages will appear on the side that corresponds to which player a given character belongs to. The properties that are described by the game are included, but not limited to, invincibility, recovery, knockdown status, and more.

When a player reaches 100% Skybound Gauge, this will turn red, indicating the player has access to Overdrive. Overdrive is a powerful buffed state that can only be used once a round. If a player's Overdrive expires, this icon will remain gray for the remainder of the round.