From Dustloop Wiki
< HNK
Jump to navigation Jump to search

Of course the guy who looks like Jesus is God Tier.

If you are even a little familiar with Hokuto no Ken, Toki probably needs no introduction. His ability to teleport around with no recovery allows for over-the-top mixups and pressure, and he has an answer to any situation, being fully equipped with two of the best reversal supers in the game, zero-startup low/high/air counter moves, a projectile, and a projectile reflector move. As his 2B has a long startup and he possesses no other low moves, Toki's mixup is centered more on confusing the opponent into guarding the wrong way than the usual high/low or low/throw styles. This makes for a fairly unique play-style, which can take some getting used to. However if you are playing to win and are willing to put in the effort, Toki is likely the best pick for you.

That being said, let us start this section off by listing Toki's main strengths and weaknesses.
Playstyle

Mostly useless. 2A is faster and provides great advantage, so use that instead.

Its long range and fast startup make it very good for footsies. Can also be used against low air-dashing opponents.

Used in some combos, such as Rei crouching infinites.

It's a normal. There were no notes on this so it's probably not very good.

Not very useful outside of combos.

If at any point you aren't sure what to do, just hold down and mash A! This makes up for any potentially mediocre normals Toki may have by itself.

Slow startup makes it somewhat less attractive than most of Toki's other mixup options, but it is important to throw it in every once in a while to keep your opponent crouching.

Can follow up with another 2C on hit or guard, which can be Jump Canceled. Used in combos or as an anti-air.

Used as an air vs air and in combos.

Wide horizontal range makes it useful as a cross-up in some situations.

Insanely long active time. Can be used as a cross-up.

Toki grabs his opponent and blasts them away from him. Hands-down the best throw in the game, makes your mixup game even more terrifying.

Toki does not have a BD throw, but this is the only throw you'd need any way.

Fairly short range but still useful in some situations. About middle-of-the-road as far as Heavy Strikes go.

Toki puts his hands together and unleashes a blast of energy. Mostly used in combos,

Not a very useful move. Slow startup, and there are better overhead options for Toki. Can be thrown out every once and a while to confuse your opponent, but you'd be better off using your teleports.

Not very useful except as a gimmick. Again, just teleport.

A fancy-looking straight chop. Useful for countering high-hitting attacks and as an anti-air.

Can be used in combination with a teleport as a great wakeup option or just to make neutral annoying.

Very important in combos, cranks up hits for Basuke. Can also be used as an overhead after an air dash or by itself.

Causes wallbounce vs grounded opponents, and recovery ends while still in the air. One of many counters Toki has.

Obnoxious counter. Unparalleled defensive option, can even be used to bait guard cancels thanks to its speed. On hit, you can followup with a teleport for a massive, free combo.

Not as awesome as Haryuushou because it doesn't cause wallbounce, but still insanely good. Can still followup with a teleport to murder your opponent violently for trying to play the game.

Thanks to your teleports, your opponent doing anything hasty in neutral is out of the question already, but that doesn't make this reflector useless.

Toki has almost no recovery while teleporting, and the very small recovery can be cancelled into anything, even another teleport. Teleports cannot steal corner.

Mix between the versions just to make it even harder to tell what you're doing.

The recovery renders this pretty much useless for anything but messing around - which you can do if you want, you are Toki after all!

Used extensively both in and out of combos, or just to make it even harder to tell what you're doing. Spamming this over and over to make the teleport line play constantly will get you kicked out of your local.

Toki hits his own pressure points, powering up. Once activated, for a period of time the damage of Tenshou Hyakuretsuken, Toukei Kohou, and Hokuto Saihaken is increased, Tenshou Hyakuretsuken and the catch moves take one extra star than usual, and Toki's life doesn't recover. This move doesn't get much use as Toki usually has better use for his Aura, but it is by no means bad.

Toki winds up and strikes his opponent's pressure points. Great reversal move, and has advantage on guard. For a period of time after connecting with this Toki's opponent is unable to recover health.

The ultimate anti-air attack - like Raoh's Shinkesshuu, this move cannot be blocked at all in the air. Opponent goes flying into the air on Counter Hit so you can continue into a combo. However, if this move is used to take off your opponents last star, a special animation plays, and following up is not possible.

Toki sits down to relax for a moment, then shoots lasers from his hands. If these lasers hit, Toki kills his opponent. The absolute best FKO in the game. 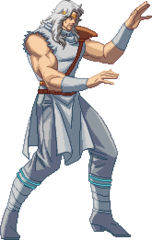 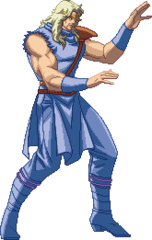 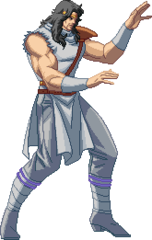 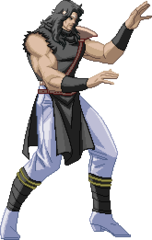