Behind the scenes of a fighting game, the properties of attacks and characters are defined by hitboxes. These show where exactly an attack can hit and where a character can be hit.

Attackbox
Where the attack can hit the opponent. These are typically colored red.

Hurtbox
Where the character can be hurt if struck. These are typically colored blue or green.

Collisionbox
Where the character currently takes up space. Unlike attackboxes and hurtboxes, collisionboxes can not overlap, and will instead push each other from side to side, such as when characters walk into each other. These are often used in games to check distances for throws and similar moves. These do not have a color commonly used.

These are just some of the common types of hiboxes. Depending on the game there may be specific boxes for throws, projectiles, assists, etc.

Let's look how some common moves behave and see what we can learn.

A typical attack extends the character's hurtbox. This means that blindly doing attacks from neutral has some risk as you are briefly making yourself a bigger target. You can be hit out of the startup of your attack or be punished for whiffing. Not all attacks have extended hurboxes during attacks, but it is true more often than not.

Some attacks only have shrunk hurtboxes before the active frames of the attack. One example of this is I-No's Stroke the Big Tree (4th image). She can go under attacks before her attack becomes active, but that same attack with proper timing can trade with her.

While most moves have attackboxes and hurtboxes fairly close to each other, some don't; these moves are typically strong for beating out other moves in that direction. For example, Ky's 6P (3rd image) is strong against air attacks since he's not hittable above his knees, and Slayer's 2H (4th image) can't be hit below his knees, making it useful for beating opponents using low attacks.

Hitboxes don't have to make real-world sense. Hurtboxes can even extend to things that don't normally make sense like weapons, capes, or even the empty space around them. This is also true for attackboxes - they can strike more (or less) area than they visually appear.

Attacks that Hit Behind You 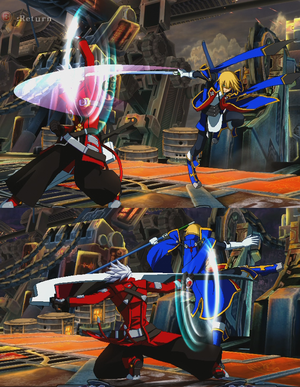 While only tangentially related, Attribute Invincibility is worth mentioning here since a lot of ASW games use it (such as BlazBlue and Dragon Ball FighterZ). Each attack is tagged with an attribute, such as Head, Body, Foot, or Projectile. Certain attacks have invincibility to certain attributes for a set amount of time.

Games that use Attribute Invincibility typically only have a few moves that shrink hurtboxes significantly since they use the Attributes for the same purpose most of the time.

Some hitbox interactions are easy to explain, while others are more confusing at first glance. Let's review some to gain a better understanding of them.

An opponent gets hit when your attackbox intersects with the opponent's hurtbox, as shown in the first example. While this sounds easy, certain interactions will appear "strange" without slowing things down or applying the concept of extended/reduced hurtboxes.

In the second example, Hazama's foot barely gets hit by Hakumen's sword as he tried to air dash over him. Players may get surprised when this happens, but this can all be explained if we slowed down the game and inspect it a bit closer.

In the third example, Akihiko and Yu hit each other at the same time, and both characters get hit. This is commonly known as "trading hits" or a "trade" for short.

In the first example, Tager's fists are able to hit Izayoi's sword, which has a hurtbox. Remember, positioning is important! Too close and the two attacks would trade, too far and they'd both miss.

In the second example, we see Jin do an attack with an extended hurtbox, and Ragna positioned to hit him. Once again, positioning is important - if Jin were horizontally closer then his sleeves would hit Ragna's head, too far and Ragna's fist would miss.

In the third example, Noel positions herself outside the range of Hazama's knee, then attacks the extended hurtbox during his recovery.

A more curious case is when an attack "hits behind" them due to the opponent doing a move with an extended hurtbox. This merits a bit more explanation: Relius' attack extends his hurtbox far forward into Mai's attack, even though he's behind her. Relius is basically sticking his hand into a blender, if he stepped back or used a move that did not extend his hurtbox so far forward, then he could hit Mai without problem.

Disjointed hitboxes are a great way to avoid the enemy's attacks since the opponent needs to be closer than normal to hit you.

Clashes in most ASW games occur when an attackbox intersects with the opponent's attackbox. During a clash, both players can cancel into most other actions, but this varies by game. There is usually a distinct visual and audio effect for clashes. Clashes only occur when two strikes intersect, but there are a few exceptions, for example, strikes like Tager's Atomic Collider or Potemkin's Heat Knuckle can not clash, even though they technically are strikes.

In game with attribute systems, clashes can happen when you are invincible to their attack, effectively giving you no hurtbox. For example, it is easier for an anti air attack to clash with air attacks than ground attacks.

Dragon Ball FighterZ and Granblue Fantasy Versus uses a slightly different system for clashing. Each attack is given a clash level and only clash with other attacks of the same level. Clashes occur even when they would trade in other games as long as they are the same level. Attacks with higher priority levels will win against lower level attacks.

Guilty Gear Strive uses a combination of both hitboxes and clash levels, where clash levels only come into play for specific attacks (primarily 5P, 2P, j.P).

Priority is a Function of Timing and Spacing

Whether an attack beats another often depends on timing and position - change either of those and you would get a different outcome.

Players often experiment in training mode to find the right timings/spacings to learn what moves beat other moves in a given situation. They then use this knowledge to improve their gameplan. They now know that once unbeatable attack actually loses if they wait and punish the recovery or get an attackbox out early enough or position themselves a certain way.

Hitboxes are not the whole story. Many moves, particularly throws (but not exclusively), also layer in up to three further checks:

Moves can be designed to hit opponents or not based on whether they're standing, crouching, airborne, downed, in hitstun etc... These tend to be found on moves that are unblockable in some way to allow the opponent to defend against them. Most common by far is that grounded throw moves cannot hit someone airborne (or even while starting to jump) and likewise airthrows can only hit players in the air:

When it comes to moves that also check distance, ArcSys games use the collision boxes, rather than any hitboxes check the distance between players when doing throws and similar moves, to avoid strange looking situations where a player gets thrown from half a screen away. So even if the hitbox for a throw looks enormous in some cases, they're often much more limited by this range check:

This doesn't mean that hitboxes don't matter, they are still checked, usually they're large enough to be ignored in a lot of cases however. Be aware that while some moves might allow you to pass through the opponent by disabling collision, the collision box still exists, you still might be able to get thrown!

A final check added to some moves is a check on the actual direction and vector between both player's origin points, which checks if the target is in front or behind and above or below the attacker, and by how much. Most of the time this check will not be noticed by a player; It is mostly used to make sure moves like throws don't sometimes hit an opponent behind the attacker:

Not all games will have hitboxes available - this is especially true with new games on new engines. But that doesn't mean you don't have any hitbox information at all, you can test things yourself and make estimates on the location of hitboxes/hurtboxes.

Judging moves based solely on its hitboxes is not enough, speed is an equally important factor, and many of the situations described above can only happen with specific timing and positioning. This all needs to be taken into account when evaluating attacks.

When people show a hitbox and say that move is too weak or too strong, they may not be telling the whole story - what good is a strong disjointed hitbox if is easily reacted to and punished? A fast move that hits far can still be strong even if the hurtbox extends along with it since the opponent can not easily react to it.