Ky is one of the poster boys for the Guilty Gear series and fulfills the role of a simple, well rounded character. Both charismatic and possessing a strong sense of justice, Ky now assumes his position as king reigning over the land of Illyria. However, when he hears of the uprising of a new threat to the world, Ramlethal Valentine, things become complicated for him. Planning to remove this obstacle in the way of his people's peace, Ky plans his assault!

Ky does well at midrange with some useful pokes and a variety of projectiles at his disposal. He is a character that can rapidly switch between keeping the opponent away and turning on the offensive. Some would be quick to assume that Ky is just your average "Shoto." However, there are certain things in his arsenal that can prove this wrong. In GGXRD, Ky was given the addition of "Grinders" (see Durandal Call below) which further augment his already proficient versatility. With this addition, Ky now has better options for spacing, setups, and okizeme. Ky excels at confirming knockdown from ground gatlings, and also greatly benefits from the reworked meter system, giving him useful options with enough tension. This effectively makes some aspects of his game easier and deadlier! 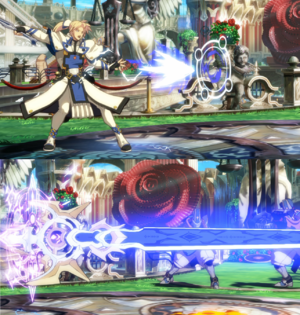