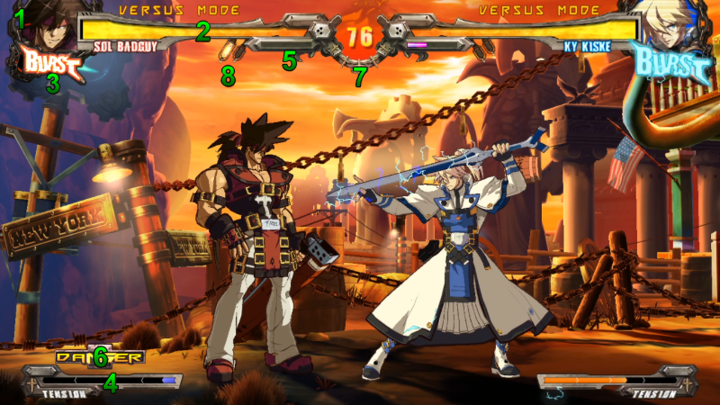 This gauge is consumed by Psych Bursts and Burst Overdrives, but is regained over time or whenever your opponent hits your character. You start the match with the gauge full. After using a Psych Burst, the flame icon next to the text "BURST" will turn blue and gradually fill up. An X appears over your character when you attempt to burst when the gauge is unusable. When you have over 50% tension and your Burst Gauge is full, the burst icon will turn blue to indicate that your Burst Overdrive is available.

This gauge is required for Overdrives, Dead Angle Attacks, Roman Cancels and Blitz Shields. It increases as you move towards the opponent, perform an offensive action or are taunted by the opponent, and fills to max if you hit the opponent with a gold Burst.

This increases each time you block your opponent's attacks and decreases when you are hit. Damage scaling in combos doesn't start until the RISC Gauge is empty, leading to much higher damage. Once the gauge reaches above 50% it will turn a brighter shade of pink, and any incoming attack will automatically be a Counter Hit if it connects.

If you keep acting passively, the message "NEGATIVE PENALTY" will appear above the Tension Gauge. When this happens, your Tension Gauge will be reduced to zero and your Tension Gain rate will be decreased for a short period of time. Take caution when the message warning "DANGER" appears as you are getting close to being put into Negative Penalty.

Each round you win will be tallied up here. Usually matches are decided by best of 3 rounds, but this can be adjusted in the game's settings.

The combo counter. Notice that during an invalid combo the combo counter turns black and the which hit was invalid is shown at the bottom right (notice the small 3).