There are five layouts that you can select when you are at the arcades: Type A, Type B, Type C, Type D, and Type E.

The taunt button does not have a defined location, but is generally to the upper right of the other buttons.

Backstep. Backsteps move a preset distance and have a bit of start-up invincibility. It is primarily used to avoid incoming attacks or as a last ditch wake-up defensive option.

High Jump. After a High Jump, you can not double jump, but you can air dash! Pressing

will have you high jump in the specified direction. You can use any downward direction for the

will still give you a High Jump.

Air Dash. Dash in the specified direction in mid-air. Air dashes quickly cover a lot space, but you can not block during the first few frames of air dashing. This makes them high risk, high reward movement option.

Double Jump. Pretty self explanatory. You can also use 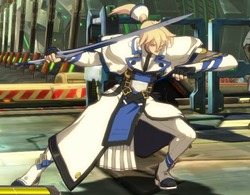 A command normal is performed by pressing a specific direction with a specific button. Every character has both a

as well. It's up to you to learn the different command normals and the properties of each for your character. 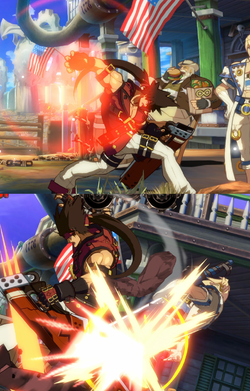 Connecting a Dust Attack on your opponent will send them flying back into the air. After hitting your opponent, it's possible to pursue them in one of the two following ways:

During either of the above, you can freely cancel normals into other normals for a short period of time.
If you perform a Homing Dash and the opponent hits the corner of the stage before the continuous tumble period ends, the opponent will wall stick instead, and normals will reapply wall stick for the remainder of the duration. 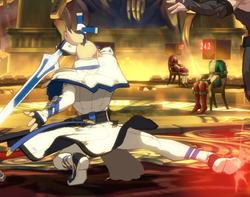 Each sweep possesses different properties and follow-up opportunities so it's important to know what options are available with your character. Sweeps provide a great alternative to Dust Attacks as they must be guarded against low.

When close to the opponent,

Throws are a strong tool in Guilty Gear to knock the opponent down, giving you the chance to set up a mix-up. Throws in Guilty Gear start-up in 0 frames and in cases of a throw vs strike trade scenarios, the throw always wins!

Note that holding the diagonals will not work when attempting a throw, it must be straight left or right.

When the opponent initiates a throw,

When two characters attempt to throw each other at close to or exactly the same time, a throw break will occur, pushing both characters away from each other and back into a neutral situation. As throws are instant and the window to break them is so short, this typically only occurs during simultaneous throw attempts. If you can anticipate the throw but don't have enough time to throw out an attack, however, this could be a valuable tool to break the opponent's momentum. 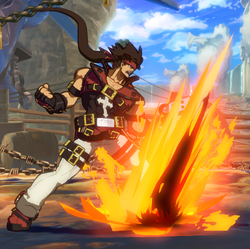 Special attacks are attacks that require a more elaborate command input, and have unique effects and properties. These range from standard projectiles (Ky's Stun Edge) to invincible attacks (Sol's Volcanic Viper) to command throws (Potemkin's Potemkin Buster). All special attacks are free, not requiring Tension or otherwise, but some characters have special attacks which change under certain conditions.

One distinct difference between special and normal attacks is that specials always build some Tension, even if they miss completely. Special attacks also deal chip damage as well.

Consumes 50% Tension
Much like "Super Combos" from other fighting games, Overdrive Attacks are attacks that cost 50% of your Tension Gauge. Each Overdrive Attack is character specific, and it's up to you to know what your character's variation does and what properties it contains.

Once your life drops below 20% and you return to neutral (or if it drops below 10% regardless), the remaining life in the Life Gauge starts flashing. At this point, Overdrives will receive a 20% increase in damage, denoted by the message "HELL FIRE!!" appearing on-screen when one connects. 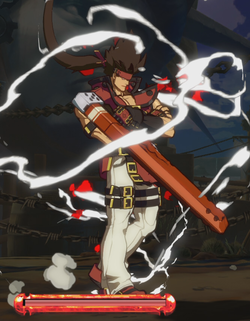 Your tension gauge turns into an IK Timer

When your Tension meter is flashing gold, you can combo into Instant Kills

During match point, when your opponent's remaining life starts flashing, the bulk of Instant Kill Mode's activation will act as a super freeze provided that you have at least 50% Tension when you activate. This is indicated by the Tension/Instant Kill Gauge flashing gold.

If you fulfill all the requirements to trigger super freeze during Instant Kill Mode activation and then do so, it becomes possible to combo into Instant Kill Attacks, offsetting the Guts mechanic that would enable them to survive for longer at lower life values. The Instant Kill Attack itself will also have a faster start-up, making it easier to connect with.

Hold back or down-back to block high or low. Hold any backward direction to block while in mid-air. 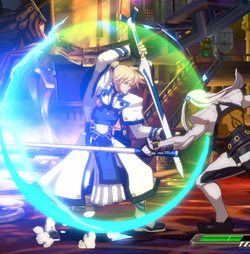 + any two attack buttons (except

)
Continuously consumes Tension while in use 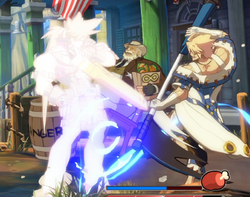 + any two attack buttons (except

)
Consumes 50% Tension
Dead Angle Attacks are invincible attacks that can only be performed while blocking, dealing very little damage but knocking the opponent away. These are synonymous to Counter Assaults in BlazBlue or Alpha Counters from Street Fighter Alpha.

These attacks are used to stop an opponent's offensive momentum, but can be baited by jump canceling into air block. Dead Angle Attacks cannot deplete an opponent's life to 0, nor can any move that follows it in a combo. 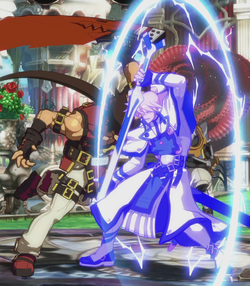 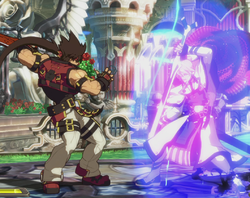 Rejected! The opponent has been repelled and is now open to attack.

+ any other attack button (except

+ any other attack button (except

during Blitz Shield, release to attack

)
Consumes either 25% or 50% Tension
Roman Cancels are a very important mechanic in Guilty Gear. We will give a brief overview of it here: 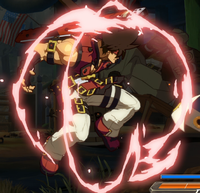 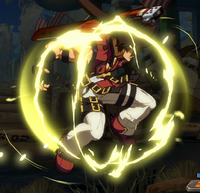 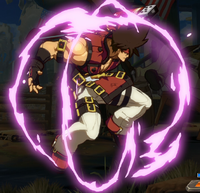 Roman Cancels may sound very expensive, but they are very versatile and very much worth the meter; Roman Cancels can make unsafe attacks safe, extend combos, and be used in mix-ups or frame traps.

+ any other attack button
Requires Full Burst Gauge
Psych Bursts are an attack where your character creates an energy shockwave and blows the opponent away. Bursts can be used as an offensive or defensive tool depending on the scenario.

The Burst Gauge fills up very slowly over time or when getting hit. 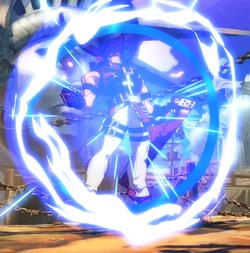 + any other attack button while blocking or getting hit to perform a Blue Psych Burst. Blue Psych Bursts blow the opponent away, allowing you to interrupt an opponent's combo or reset the momentum of a match. 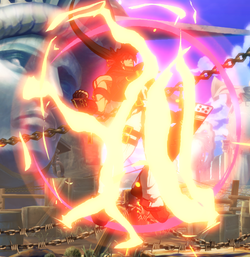 + any other attack button while in a neutral state to perform a Gold Psych Burst. 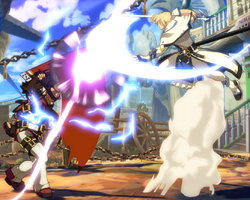 A clash occurs when simultaneous attacks strike one another. Clashes result in one of two scenarios: 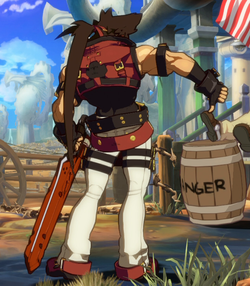 All characters have both a Taunt and a Respect. To perform a Taunt, simply press Start (Arcade) or R (Console). Respects are performed by pressing

Performing a Taunt will raise your opponent's Tension Gauge slightly. Performing a Taunt at the end of the match after the opponent is defeated will cause a "Rakusyo!", which will give the other player 50% Tension at the start of the next round.