For playing neutral with Jack-o it is important to also know the trajectory of the minions after they have been hit. 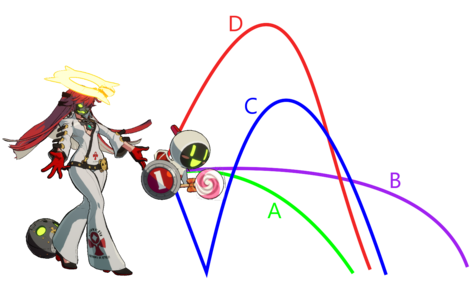 2H goes slightly higher than j.S A and B will be the most commonly used for neutral.
Because of this you typically will be using 5P,5K, and 6P to hit the servants.

Unfortunately for Jack-O, exceptionally few of her normals naturally frame trap into other normals, so you're better off utilizing stagger pressure between normals. However, when it comes to cancelling into special moves from normals you will find that 214K or 236K are sufficiently delayed enough to cause natural frame traps. These frame traps are easy to perform, and since both of these special moves can be combo starters given the correct servant positioning, they have the potential for big and easy damage. Be wary of the frame traps based on Tiger Knee specials, as it is possible to accidentally delay them. Also, specifically for j.236K, frame traps involving this move can be beaten by 6P. The same is rare, but possible for 214K/j.214K while the servant is falling. When the servant is floating at their natural height, Attack Command cannot be dodged by 6P (needs testing on all characters).

To explain the significance of the Frame Gaps;