Every character has a universal health value of 10,000.

When characters take damage, a percentage of that damage can be healed if they are able to tag out (colloquially called blue health). Tagging back in or getting forced back in removes any recoverable health the character has, so players will need to decide if tagging in a character is worth the potential health lost.

The amount of recoverable health depends on the context:

Characters tagged out and not on cooldown regain health at the rate of 3.17 health/frame (190.2/s). During Sparking the point character regains health at a variable rate determined by the amount of recoverable health.

Ki (AKA qi/chi) is the primary offensive resource in the game. Players will use Ki to perform Vanish, Super Attacks, Guard Cancels and more.

Ki is increased by advancing toward the opponent, landing attacks, blocking, and getting hit.

Ki gaining is separated into offensive and defensive. Sparking! doubles the amount of Ki gain from both means, but doesn't affect Ki gain from Z-Assists.

Moves that cost Ki to use do not gain any Ki. After using Ki, Ki gain from offensive means is reduced by 90% for: 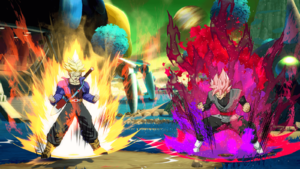 Recreate entire episodes of the show

Hold L+S to perform a Ki Charge and quickly fill up your Ki Gauge. There is a fairly long minimum duration that Ki Charge is active for, and you are in Counter Hit state the entire time you're charging. Note that the rate at which you gain Ki increases the longer you hold L/S.

Assists and tagging out are disabled, but you can still Ultimate Z Change

This cooldown also applies after manually tagging in a character.

Ultimate Z Change is unaffected by this cooldown and can be used at any time.

Can not use assists at all, not even for Ultimate Z Change

After manually tagging in or getting forced out via Dragon Rush, your teammates enter a lockout state with a red X over their portrait. During this time, you can not use them for Z Assist nor for Ultimate Z Change.

Lockout duration depends on how the teammate was tagged out:

When you use it can determine the results of the match

The Sparking Blast Icon is located under your health gauge and indicates that you can use a Sparking Blast. Each player starts with one icon at the start of each match and the only way to get another is to summon Shenron and choose the wish "Give me the ultimate power!".

In the middle of a match, players can collect Dragon Balls through one of two methods.

The first method is performing combos of specific length:

The second method is by successfully landing an attack with Dynamic! property. This will unlock Dragon Balls in the following order:

If a Dragon Ball in this sequence was already claimed through the first method, the next in sequence will be obtained instead.

The Dragon Balls are shared between players, meaning either player can use them to summon Shenron. 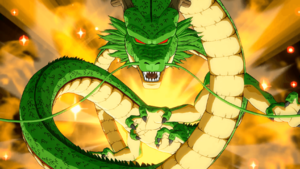 What is your wish?

Once all seven Dragon Balls are collected, the next person to land an attack with Dynamic! property while having a full 7 Ki Gauges will summon Shenron (AKA Shenlong) with no Ki cost. The summoner has 5 seconds to choose one of four benefits:

Shenron can only be summoned once per match.