Before we go into it, let's look at the character first.
Junpei is a "snowball" character that relies heavily on momentum. You need to get in and score Runs as soon as possible to activate Victory Cry. Junpei is pretty weak outside of it, so you need to get his Install going, otherwise you'll most likely lose.

Now, let's start with the offense. Junpei's B normals have decent reach, you should try getting in with them at mid range. Once you make them block, you have tons of interesting options:

Once you're in, you should focus on getting Victory Cry. Use as many B normals as you can and finish the combo with a Homerun Super or extend it with One More Cancel (if you need to). If you already got his Install going, then get those Clean Hits right and try to finish your combos with 5D (when in corner) to get okizeme (knockdown). That way you can keep them on the defensive while you mix them up for another combo. Don't be predictable and remember to use every single tool you have in your arsenal.

Junpei's defensive game is not great, but decent. His DP is useful and his Guard cancel is good (5AA animation). Aside from those universal options, his Homeruns Supers and Awakening Super can also be used defensively to get out of a bad situation, I don't recommend it unless you have a good read on your opponent; They are completely unsafe if baited and you might lose SP over nothing. His DP is a meterless option but also unsafe if they block it, be careful with it. Sometimes you might want to use a Homerun Super after a blocked DP to hit them while they try to punish you.

When defending projectiles and other types of long ranged attacks, remember that you have Deathbound, it's a pretty good move to deal with long range pressure. SB Sliding is also an option since it's a move that advances Junpei, has armor and can be feinted. These are very good tools to work with in these situations. Another way of dealing with them is Junpei's exclusive ability to reflect projectiles. If you use any bat move against a projectile, it will turn that attack into a fireball that will go back to the opponent really fast. You can even score a Base/Run by reflecting the projectile alone. Do remember that Junpei won't be able to reflect multi-hit projectiles such as Narukami's Ziodyne or Akihiko's Maziodyne.

Neutral game with Junpei seems a bit tricky. He has excellent jumping normals like j.A/j.B/j.C but lacks speed on the ground. So more often than not, you'll find yourself covering space with jumping normals alone. His 2B works well as an anti-air but does not hit behind him. His Persona normals covers a LOT of space on the screen and can be really useful sometimes. j.D variations makes Trismegistus fly to hit the opponent either downwards or upwards, if he does hit his target while flying downwards, he'll kick them 2 more times giving you enough time to close the distance. 2D sends Trismegistus upwards and can be canceled into Deathbound on hit. Deathbound itself is great for neutral game against some characters, specially zoners since the Persona can get them while they're setting up. It's not advised to use this move against Rushdown characters though, they might punish you if you're too close and the move itself is a little slow to use against a character that wants to be in your face at all times.

To wrap it up, here's a list of pokes/moves you should use at different distances during neutral: 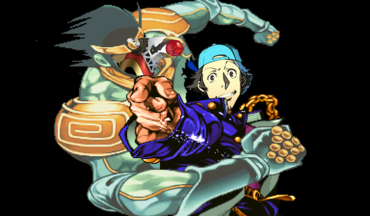 Junpei's 5D is an interesting okizeme tool for him as he can start pressure and go for mix-ups while Trismegistus is pecking at the opponent, but many opportunities he has to use it after most hard knockdowns are not an airtight setup. In a lot of them, the opponent can simply counterattack to hit him and break it, or roll on wake-up to avoid it.

However, if Junpei is in Victory Cry, the new properties his moves get gives him access to a knockdown that is able to grant him a meaty 5D set-up: a Clean Hit B Bunt (214B) in the corner. This is occasionally referred to as the "Trismegistus Finger".

A meaty 5D is very important, because it can allow Junpei to do a lot of things for okizeme:

And of course, the setup does have its weaknesses:

This doesn't invalidate the technique entirely however, as a delay tech can be called out by stepping back and doing 5D. If they didn't delay tech and you do the walk back version, the okizeme is less rewarding but still workable.

Changes to Shadow Characters in 2.5 have made them a lot more viable to play across the board, and Shadow Junpei is no exception. While the ability to cancel into a big Shadow Frenzy combo and do a bunch of damage isn't exactly unique, Shadow Junpei can turn that big damage combo into a roundstart Victory Cry activation.

Shadow Junpei is capable of turning his first touch of the game into a combo that grants 10 runs, as opposed to regular Junpei needing multiple touches to activate the install. Shadow Junpei is capable of doing this from ZERO SP after a 5A, and has routes to do this from practically any of his main starters. This earlier access to victory cry makes him threatening right off the bat, as any touch from him will make him astronomically stronger.

Shadow Junpei also benefits greatly from the mechanics of shadow characters past just earlier access to victory cry. The increased meter gain granted to shadow characters meshes perfectly with Victory Cry, as combined with his natural SP regen with Victory Cry, a corner BnB can easily grant 50+ SP. This allows him to always have ample meter to spend on OMC's to make his risky mix-ups safe and more threatening, SB skills, and his awakening super Super Vorpal Bat which Shadow Junpei has constant access too, which makes up for the 10% damage loss Shadows have.

Last but not least, Shadow Junpei's frenzy routes when he's in Victory Cry are some of the most devastating in the game. He can easily reach 5K off of poor starters with low meter due to the high minimum damage of SB Super Vorpal Bat, while reaching up to 8K off of CH 5C starters with high meter. These routes are consistent and lenient, and allow you to easily adjust them for differing amounts of meter, all offering high damage due to the SB Vorpal ending. He also has access to potent Neutral Frenzy routes in the corner, giving him his usual high damage while also giving him over 1/3rd of his burst back.

However, Shadow Junpei still has his drawbacks. His Pre-Victory Cry frenzy routes can be finnicky, and dropping them is immensely punishing, typically leaving Junpei punishable, meterless, and even weaker than usual due to the innate 10% damage reduction given to shadows. Having to spend burst to obtain victory cry at the start of the round comes with the downside of him having to hold damage before he can pop frenzy, and leaving him burstless in the middle of the round after activating victory cry. Regular Junpei doesn't have to deal with this finickier routing, more freely able to spend his burst defensively. Regular Junpei also has access to awakening, when combined with his HP Regenration in Victory Cry allows him to have insane amounts of defensive capability.

Overall, the strengths of Shadow Junpei make him a harder, yet much stronger and more rewarding version of his regular counterpart. Regular Junpei is the recommended starting point for new characters interested in the character, as he's overall much easier while still being strong in his own rights.