Strikes are the most common form of attack in the game like punches, kicks, and sword slashes.

Projectiles are attacks that are entities independent of the attacker, like Ky's Stun Edge.

Throws are short ranged unblockable attacks that temporarily turn both characters invincible before dealing damage to the opponent.

Zato-1's shadow, Eddie, is in his own unique category: he is technically a projectile (as Jack-O's Shield negates his attacks), but is surrounded by a hurtbox, so he can be hit by strikes and projectiles (but not throws).

Some attacks are invulnerable only to certain types.

Some attacks shrink the hurtbox of characters, even when it looks like they occupy that space.

Most anti-air 6Ps fall into this category. Because of this, 6Ps can lose to air attacks when the opponent is able to get close enough to touch the character's hurtbox. Thus the same 2 attacks can win or lose depending on their spacing and timing. Players need to learn how their attack will behave in different scenarios, decide if the outcome is favorable, then correctly execute. 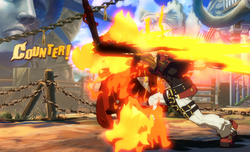 Hitting an opponent out of their attack will net you a Counter Hit (CH).

Counter Hits increase hitstun or do special effects to the opponent such as wall bounce or ground slide, allowing for stronger combos. In general, the higher level of the attack, the more additional hitstun is inflicted. Hitting an opponent when their R.I.S.C. Level is flashing will be a GUARANTEED Counter Hit. You can even get multiple CHs in a row if the R.I.S.C. Level is raised high enough. Throws will only be CH if their R.I.S.C. Level is flashing; interrupting an opponent's attack with a throw will not be a CH. Contrary to popular belief, CH's do not inflict additional bonus damage, but they usually enable stronger combos thereby increasing damage dealt.

Mortal Counters occur when a player gets hit by a strike during Danger Time.

The attack will automatically trigger Counter Hit effects as well as more hitstop, time slow, and the ability to cancel the attack into anything that a clash could cancel into.

Certain attacks will launch the other player into the air, even when they are standing or crouching.

Standing Dust is an obvious example, but also many Sweeps will actually slightly lift the enemy into the air and thus can be used to start air combos. Other basic examples include Millia's and Potemkin's

Most attacks push the opponent away on hit and block, but certain attacks will actually pull the opponent closer.

These attacks can be used to greatly aid combos and perform setups. Examples include Ky's

Some attacks bounce the opponent off the wall/ground when they hit.

A ground bounce causes the enemy to bounce off the ground and back up into the air, thus having a similar effect as a move that Floats. A wall bounce causes the enemy to quickly bounce off the wall and fall toward the ground. Wall bounces can only happen to enemies in the air, however most moves that wall bounce also float, which gives you one less thing to worry about. Typically with Wall bounces, the farther from the corner the enemy was, the earlier he will be able to tech out of the wall bounce. 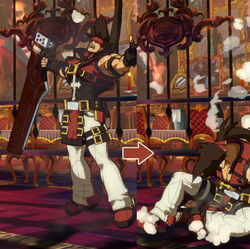 Wall Stick will cause the opponent to stick in place on the edge of the screen, then slide down afterwards.

Once the opponent reaches the ground, they will be in a crouching state (and still in hitstun), allowing players to go for re-stand combos (or resets)! Interestingly, if an opponent is wall stuck very close to the ground, he will be guaranteed to go through the slump animation, which gives additional hitstun and opens up many combo opportunities. Sin Kiske's Beak Driver loops, for instance, abuse this mechanic to its fullest. Hitting an opponent with a wall stick effect from a full screen away may just throw them REALLY far away and never stick to the wall.

Certain attacks just can't be blocked at all.

Examples include Potemkin's Slide Head (236S) and Slayer's Undertow (632146P). While you can not block these attacks, you can Blitz Shield them!

Off The Ground Attack

To Off The Ground (OTG) someone means to strike them after they hit the ground.

Unlike other games, once a character has hit the ground, you cannot OTG them into a relaunch. OTG attacks only do 30% of their normal damage, and can be teched very quickly. This generally makes OTGs poor tools for adding damage, but good for pushing the opponent towards the corner at the cost of sacrificing okizeme. When the opponent is very low on life, some players OTG to tack on extra damage after a knockdown to try and K.O. the opponent.

Ground Slides slide the opponent on the ground, where they can be comboed off the ground WITHOUT triggering OTG effects.

Hitting a sliding opponent is effectively like hitting an airborne opponent. For example, Sol's Fafnir causes slide and he can use it in combos to push the opponent to the corner. Once the opponent stops sliding, they enter normal knockdown state and standard OTG rules apply.

Each attack has an Attack Level. Depending on the level, the attack will inflict a different amount of hitstun / blockstun, though some attacks override these default values with their own.

Use the chart below to determine how much hitstun/blockstun an attack will inflict. The level for each attack can be found in the individual Character Frame Data sections.

※1: The additional hitstop is only applied to the receiver.
※2: During an airborne Counter Hit, untechable time is doubled (with some exceptions).
※3: Abbreviation of Faultless Defense. 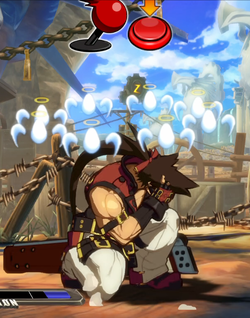 Mash, because your life depends on it

If you are struck repeatedly over short amount of time, your character will become stunned (also known as "dizzied"). You will be unable to perform any actions such as blocking, attacking, or even teching combos while stunned.

Stuns are indicated by angels flying around your character's head. The angels act as a timer and when all the angels are gone, you will regain control of your character. You can speed up the recovery by shaking the joystick in all directions and rapidly pressing the buttons.

Stunning an opponent mid-combo will allows players to land and begin another combo (or an Instant Kill) on a stunned character if their opponent doesn't shake out fast enough.

Character's stun resistence values can be found in the System Data section.

One attack can interact with multiple targets when they occupy the same space - like Zato with Little Eddie or Jack-O with her Servants.

Eddie will absorb the strike, allowing Zato to move/attack freely. The attack counts as striking an opponent, so attackers can still perform gatlings, special cancels, or jump cancels.

Since Zato was not hit, (and thus not in blockstun or hitstun) Roman Canceling after hitting Eddie will count as Yellow/Purple depending on when you RC. This is a problem for reversals like Vocanic Viper as that means they can not be Yellow/Purple Roman Canceled, making these moves much weaker against Zato or Dizzy attacking in tandem with their partner.

The same rules apply to Dizzy and her fish.

The attack will hit both targets... most of the time. The object will absorb one active frame of the attack, but the remaining active frames can still hit other targets. Thus attacks with only 1 active frame are ineffective in this scenario.
Some unexpected objects fall into this category as well, such as Elphelt's Pineberry or Bedman's Deja Vu Icons.

Each character's Full Frame Data page shows both the Frame Advantage when an attack is blocked. Air attacks don't have Frame Advantage listed since that value is heavily influenced by when the attacker lands after an attack.

When an attack hits an object, both objects freeze in place briefly to give the attack the feeling of more impact. This effect is known as hitstop and can vary in duration, like Sol's 5P compared to his Fafnir (41236H) . Hitstop helps with combo consistency because you can buffer commands like special cancels during hitstop and it will be executed immediately after hitstop ends. Characters with charge moves (like Venom's [4]6S) also have the added benefit of getting more time to charge those attacks.

Objects experiencing hitstop are frozen in place, but other objects on the stage are unaffected. For example, when Ky's projectile hits the opponent, Ky does not experience hitstop, only the projectile and the opponent do. From Ky's perspective, the hitstop the opponent experiences can be thought of as additional blockstun/hitstun!

When an attack hits an objects, both usually experience the same amount of hitstop, but this is not always true. Some attacks deal different amounts of hitstop on hit vs block, or normal vs counter hit.

Baiken's Azami is an example of this.

Amount of Hitstop
The amount of hitstop an attack deals depends on its attack level, but certain attacks can override these default values.
Getting Hit While in Hitstop
Hitstop does not confer any invincibility - your state carries over from what you were doing before. If you were invincible/hitstun/blockstun before hitstop, then you will still be in that state during hitstop. If you are hit while in hitstop, then the previous hitstop ends and the new hitstop begins.
Hitting Little Eddie and Dizzy's Fish
Both you and Eddie/ Fish experience hitstop.
Hitting All Other Assist Characters
Neither you nor the assist experience hitstop.