Walking is the most basic movement option in your arsenal. Walking is a slow low commital way to move and presents the least risk. Walking can freely and immediately cancel into any action - including blocking, making it useful when baiting and whiff punishing moves or in spacing attacks during combos and pressure while minimizing risk.

When ending a run, there is a skidding animation that gives any action done out of it forward momentum. While you can still block in this state, players can choose to stop immediately by spending some meter to immediately cancel a run into Faultless Defense, halting all forward momentum. This technique is known as FD Brake.

Not all characters can run -

Giovanna can only dash a fixed distance forward,

I-No becomes airborne and continues to gain height the longer the dash is held until eventually stopping, and

Potemkin have no forward dash at all.

+ Dash while grounded
Backdash to quickly move away from the opponent.

Backdashes have invincibility on start-up, which can help you evade opponent's attacks. Be careful when using it, as the invincibility does not last long for most characters and is best used when there is a specific attack you intend to avoid. The exact duration of backdashes and invincibility varies between character and will be listed in the each character's frame data.

Most characters only have 1 air option: you can either double jump or air dash, but cannot do both. There are exceptions, however:

while grounded to jump in that direction
Jumping is the primary air movement of all characters and has lots of potential options afterwards.

Goldlewis can double jump by inputting another jump while airborne. By canceling a run into a jump, horizontal momentum will carry over into the jump giving players additional jump trajectories to move around the opponent's attacks. Some normals can be jump canceled on hit or block.

before jumping from the ground
High jumps are used to travel a much greater vertical distance than regular jumps.

High jumping is like a regular jump, but travels higher and faster. After a high jump, characters can air dash, but not double jump.

Nagoriyuki can air dash by inputting a dash while airborne. After air dashing, characters can not cancel into other actions immediately - they must wait a brief moment before being able to attack or block. The amount of time varies by character and exact values can be found in each character's frame data.

Most characters have a prejump duration of 4 frames, while

Nagoriyuki's high jump has a significantly longer prejump duration than his regular jump, at 10 frames.

It is actually possible to cancel prejump into specials and Overdrives, though most characters do not often use this. This property exists so that attacks that involve an Up input, such as

Guard:
AllStartup:
9Recovery:
33Advantage:
-28) can be used without doing tricks to hide the jump input (such as whiffing moves beforehand).

Some airborne moves have a set amount of landing recovery like

This is straightforward; upon landing the character will enter a completely vulnerable landing animation.

What's unique is that even for moves that don't have a specified landing recovery - like most air normals, or just jumping, there is still a unique landing recovery that disables certain actions for limited amounts of time.

1~3F after landing is normal recovery (cannot do any action such as blocking, attacking, moving etc...)
4F onwards all actions possible

1~9F after landing is normal recovery (cannot do any action such as blocking, attacking, moving etc...)
10F onwards all actions possible

1~10F after landing is normal recovery (cannot do any action such as blocking, attacking, moving etc...)
11F onwards all actions possible

Getting knocked down by most attacks causes a soft knockdown, where the character will instantly roll backwards and quickly recover. A soft knockdown lasts for 30 frames and is fully invincible.

Certain attacks cause a hard knockdown, where the character will lie on the ground briefly before getting up in a fully invincible state. As the character lies on the ground, they are considered in an Off The Ground state and if hit will be knocked backwards into a soft knockdown. Thus most players tend to use this time to set up okizeme rather than continuing the combo. A hard knockdown lasts for 55 frames. 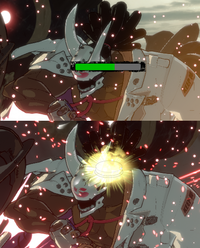 Press any button when this bar empties to recover faster

When hit by attacks that cause stagger, players can press any attack button to recover more quickly. There are three different timings for a successful stagger recovery, the faster the timing, the shorter the stagger duration before you're able to block. The button icon will glow blue for slow timings, red to orange for normal timings, and gold for fast timings. There is no penalty to attempting multiple times, and the timing is not very strict, so players usually press a few buttons around when the bar empties and can escape ASAP.

You can tech off the wall after a certain amount of time.

A character in Wall Stick state will automatically recover after 60 frames if not hit by an attack that causes Wall Break. This recovery is fully invincible frames 1~24 (no pushbox frames 1~9, has pushbox frames 10~24). This recovery can be canceled into any action starting frame 10. The action will be invincible for a period of time (length of invincibility depends on when you interrupt Wall Recovery).

If a character gets stuck to the wall while grounded, they will be unable to recover from the Wall Stick and will instead slump to the ground for a period of time (frames 1~27) before standing back up in a fully invincible state (frames 28~42). Being hit at any time during this slump will cause a Wall Break. Unlike Wall Recovery, any action you do after will not have any invincibility as you cannot interrupt it early.

Canceling is skipping some or all of the recovery of one move by starting another move. This usually requires that the first move makes contact with the opponent, and that the first move can be canceled into the second. Cancels are commonly used to make combos and blockstrings.

There are many types of cancels, we wil go over them here.

Normal moves can be canceled into other normal moves, including command normals. This is known as a gatling.

There can be character-specific variations, but the general rule is:

It takes some getting used to, but it should feel natural after some practice. Gatlings do not need to be done immediately, players often delay their gatlings to act as a frame trap - baiting overeager opponents to retaliate then hitting them out of the start-up of their attacks. Note that while most normals can gatling even during recovery frames,

can only gatling during active frames.

Most normal moves can be canceled into special moves or Overdrives.

Nagoriyuki can also cancel his specials in the same way, although it will raise his Blood Gauge.

Note that while most normals can be special canceled even during recovery frames,

can only be special canceled during active frames.

Normals can also be kara canceled into special moves, Overdrives, Faultless Defense or Psych Burst during their first 3 frames of start-up. Taunts are considered a special move.

Some normal moves can be canceled into a jump or high jump on hit or block.

Guard:
MidStartup:
7Recovery:
10Advantage:
+3 is an exception to this rule.
In the air, if you have an air jump remaining, all air normals except for jumping

Jack-O' can jump cancel her jumping

Some normal moves can be canceled into a dash or air dash on hit or block.

can be dash canceled. This dash has a fixed duration, varying by character (see character's frame data for more info). All grounded dash cancels can be kara canceled into special moves or Overdrives during their first 3 frames.
In the air, if you have an air dash remaining, all air normals except for jumping

can be air dash canceled.

Nagoriyuki cannot dash cancel, as they do not have a traditional forward dash or air dash.

Ramlethal can dash cancel the first two hits of Erarlumo 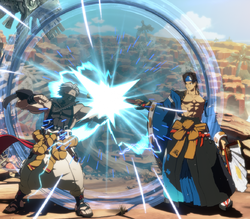 A clash happens when you and your opponent's attacks hit each other in a way that both attacks are nullified. During a clash, both characters gain 10% Tension and are frozen in their current animation for 17 frames, after which their animations resume, however they additionally can cancel into forward dash, any attack, or Faultless Defense, but not backdash, jumps, or normal block. Thus when clashes happen either the players may struggle to react to it because it is unexpected, or they understand how the attacks interact well enough to intentionally cause a clash to cancel out the opponent's attack, then retaliate with their own. When two projectiles clash, players are not frozen, and when two attacks clash, any active projectiles are not frozen.

There are two ways clashes happen:

Roman Cancel is a mechanic that allows you to cancel actions that are not normally cancelable at the cost of Tension. The Roman Cancel system in Guilty Gear -Strive- is designed to be multifaceted and comes in various colors. Each color of Roman Cancel releases a shockwave in a circle around your character with different properties and uses. 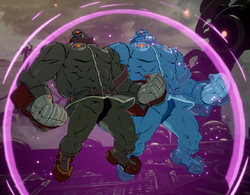 Sike, I wasn't actually there! 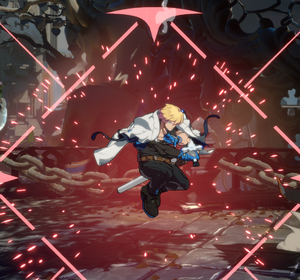 Go straight into the next attack of your choice!

Note: Consult the Roman Cancel Values table above for each color's cancel window.

Whenever you press an attack button, it will automatically be buffered for an additional 4 frames, for a total input window of 5 frames. This means that difficult links are easier to do by pressing the button right at the very end of your recovery.

Similarly, the same principle can be applied to dashes. If you complete a dash input within 5 frames of recovery, then regardless of any directional inputs after that, you will begin dashing as soon as recovery ends. This can also be done any time while your character can not move, such as during blockstun, on wake-up, etc. 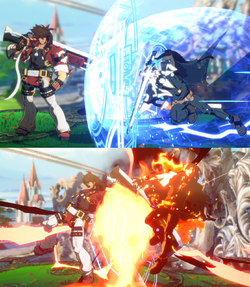 During an opponent's super freeze (such as when the screen darkens during a Roman Cancel or the camera focuses on the attacker during an Overdrive), players can input a special or Overdrive and it will be executed immediately after the super freeze ends. This means that provided you are not in the middle of an attack, it is trivially easy to react to an opponent's Overdrive with an attack of your own.

Overdrives With No Start-Up After Super Freeze

... unless they're active immediately after the super freeze!

Guard:
Ground Throw, AllStartup:
11+0(41)Recovery:
-Advantage:
N/A(-18) is a prime example of this; you must already have some way to avoid it before the super freeze or else it will be too late. You can identify such attacks in the frame data by looking at their start-up post-flash, which should be 0.

During a large Counter Hit, players can input additional commands during the zoom-in and slowdown effect. These new inputs will override whatever the player inputted previously, letting players input commands that will only come out on a large Counter Hit.