From Dustloop Wiki
< GGST‎ | May
Jump to navigation Jump to search

May's goal in neutral is to get her opponent into the corner, then use strike/throw pressure and anti-air reads to open up her opponent to high-damage wallbreak combos. May has many strong tools to achieve this, including good ground and air movement, a variety of pokes to harass her opponent and powerful counterpokes, anti-airs, and air-to-air options. Mid-screen, her neutral wins will usually result in good corner carry or okizeme. Many of May's attacks have a long total duration (including throw whiffs), relatively high startup, or both, but lead to enormous reward on hit. May benefits strongly from conditioning her opponent so that she can land these committal attacks by predicting her opponent's actions.

May is at her weakest when she is defending because her kit lacks meterless tools to escape from pressure. On defense, May needs to rely on matchup knowledge, universal mechanics, and her metered reversal to escape her opponent's pressure.

May has a variety of tools that she can use in neutral. Her pokes (5K, f.S, and 2S) can cover a variety of distances and positions with reasonably fast startup for their maximum range. Her counterpokes (6P and 5H) are effective against mid/high pokes and stubby/low pokes, respectively.

May has one fast and relatively safe anti-air (6P) and three situationally powerful but slow anti-airs - 2H covers high jump-ins, 5H covers IAD, and 6H can cover either but needs to be used as a pre-emptive read because it is both slow and not disjoint. May can also use her S vertical dolphin ([2]8S) as a fast and safe anti-air as long as she has the charge to use it, and she can use her H vertical dolphin ([2]8H) as a long-range, reasonably fast anti-air against high airdashes.

May usually dominates the air with her massive j.H hitbox, which leads to a big reward on counterhit both as an air-to-air and as a jump-in. May can use j.H aggressively or as a bait following a backwards airdash to hit an advancing opponent. May's other aerial attacks (j.P, j.K, and j.S specifically) are situationally useful because they are faster than j.H, do not extend her hurtbox as much as j.H, or both. May's j.D is exceptionally effective against airborne opponents that are both above and in front of May.

May has some tools that can set up tricky situations from neutral. May can use 3K as a risky get-in tool. This is particularly effective against aggressive opponents or opponents with short effective range, since 3K excels at catching forward movement. May can use her S horizontal dolphin ([4]6S) to whiff punish or counterhit exceptionally slow attacks from a distance or as a risky poke from mid-range that sets up a RPS situation on block that favors May in many matchups. In pressure, May can attempt to use H horizontal dolphin ([4]6H) as a risky pressure reset against opponents who expect an S dolphin and choose not to poke. May can also use j.2H to set up ambiguous left-right crossups that can lead to a knockdown on hit or a high/low mixup on block with 2K, [2]8H, and 5D/5[D]. Against cornered opponents, May can use airdash cancels to set up high/low fuzzy offense. May's ability to set up tricky situations in neutral improves greatly when she has meter to use Roman Cancels. 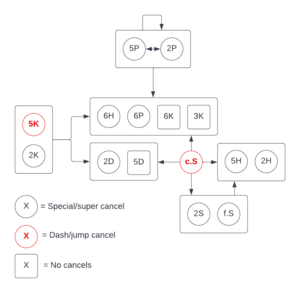 May has a potent air-to-air game when she holds her second jump/airdash for a hit confirm thanks to the launch trajectory and momentum from her j.D. This momentum is preserved if May uses a fast Roman cancel, which can lead to air combos with extreme corner carry.

May's highest-damage punish options are c.S, 2H, and 6H, with 6H being especially effective against cornered opponents and 2H being somewhat more effective at mid-screen and significantly more useful when May is in the corner. c.S is good for baiting bursts, since May recovers in time to block a burst from the attack and, on high air hits, can delay the follow-up attack for a long time while without dropping a combo. May can use 5K as a faster mid-range punish or 2K or 5P as faster short-range punishes, with both leading into 3K for a knockdown.

At a distance, May can attempt to use 5K, 3K, IAD j.H, IAD j.2H, [4]6S or f.S > [4]6S to begin pressure. All of these options except 3K will lose to 6P, all except the IADs can be safely blocked low, the IADs and 5K > dash-in are very reactable, and 3K is very unsafe on block. At a slightly shorter range, May can attempt to use 2S > [4]6S, which will beat 6P while being safe on block, at risk of getting poked herself. This weakness in May's midrange pressure requires careful play in neutral to overcome against a skilled opponent.

May can use counterpokes and reactive play to secure a knockdown into pressure. In this situation, May can use 6P CH, 5H CH>[4]6H>5K>3K, [2]8S air hit, [2]8H air hit, and [4]6S CH > throw to get knockdowns from a safe distance, depending on her opponent's neutral tactics.

May can use rock-paper-scissors to threaten pressure after S Horizontal Mr. Dolphin, which will leave opponents feeling like it's never their turn when done correctly. Once May is close, she can use c.S to establish strike/throw pressure or 5P/2K to try for a quick knockdown into okizeme.

If May can get on top of her opponent, she can use c.S to start pressure, which has stronger and more varied follow-up options that are harder to defend against. May can also use 2K at close range to start low/high pressure against opponents who fall asleep on defense or who focus too much on strike/throw defense, or 2P or 5P to set up quick strike/throw mixups in situations where she is too far away or not at enough frame advantage to use c.S.

May's powerful strike/throw pressure lets her apply simple okizeme with meaty c.S to great effect against opponents who cannot use a reversal. Against characters with meterless reversals (Sol, Ky, Chipp, and Leo), May can instead choose to throw or 623K on wakeup, which will beat these reversals if done correctly. Throw okizeme is also an effective way to punish players who are overly respectful of May's strike okizeme, and can condition them into jumping or mashing on wakeup instead.

Some knockdowns allow May to perform specific okizeme setups that are safer than c.S. Some of these setups are listed below:

May can choose to use 2K instead of c.S in all of these situations to threaten a low, though the significant loss in potential damage is not worth it unless the opponent is very low on health and will lose either way.

When May uses S Horizontal Mr. Dolphin ([4]6S), and her opponent blocks, the opponent can follow up in a number of ways using the frame disadvantage that [4]6S gives up:

May, in turn, can follow-up a blocked [4]6S in a variety of ways. In many cases, she can attempt to take her turn back by making a read and assuming some risk:

May has a lot of pressure options that, while costly or easy to counter, are unconventional and situationally very rewarding on success. May can often get away with these tactics against beginners or players who haven't seen the tricks, but they are very punishable or expensive if successfully countered or defended:

(Goshagawara cross-up) Late PRC to cross-up right before the splashdown.

May doesn't have much for character-specific defensive tools outside of her reversal overdrive. She will rely heavily on faultless defense, mash-outs, YRC, and counterhit 6P to escape pressure, depending on her opponent's pressure strings. May's best abare and quick punish attacks are 5P (speed), 2P (speed, better hurtbox than 5P), 2K (low profile, trades a little speed for a little reach), 5K (trades a lot of speed for more reach), and [4]6S (trades speed and a very poor hurtbox for a lot of reach). May has access to a mid-range hard knockdown from a command normal (3K), which she can use as a gatling after punishing with her fast punch or kick attacks to take her turn back. With 50 meter, May gains access to a reversal overdrive. In some matches, the threat of a reversal overdrive is enough to cause May's opponents to let off on pressure, which alleviates one of May's biggest weaknesses. If May's opponent doesn't respect this option when she has 50 meter, May can use it to deal a lot of damage and potentially steal a round from her opponent's pressure string or okizeme.

May can deal a lot of damage and wall-break without meter, so she doesn't need to use it to increase her combo damage (though May can deal immense damage in some situations by spending meter). May becomes significantly more threatening when she has 50 meter to hit confirm easy-to-land attacks with RRC, which opens up opportunities in neutral against careless opponents for more damage and causes cautious players to play more passively. May can also use her meter to make up for her otherwise mediocre defense through Faultless Defense and YRC, or to open up her mid-range mixup game against opponents who are good at defense.

May can use run up 3K > 66RRC as a way to "skip neutral" / bypass the opponents pokes to either start her pressure or confirm into a somewhat scaled combo. Such as (3K > 66RRC > 6[H] > [4]6H) using 3K > 66RRC as a roundstart option after wallbreak is also somewhat strong, due to it bypassing predicted roundstart Dolphin counters, such as 6P and even some roundstart buttons, like

May's pressure resets are quick and can lead to huge RISC or a command throw on block. There are some specific points in May's pressure where you can consistently challenge her resets:

May can set up many frametraps in her pressure outside of these situations using dolphins and beefy normals, so mashing out of her pressure is very risky and the risk/reward is skewed heavily in May's favor.

May's Horizontal Mr. Dolphin has a fairly large hurtbox, and its hitbox does not hit low-profile characters. 6P and low pokes are most effective at stopping it. That said, its speed and range mean May excels at counterhitting slow normals in neutral and whiff-punishing attacks from a distance. Try to keep track of when May could have a charged dolphin ready and ensure that you use your neutral options carefully so that she doesn't get free dolphin hits against you.

May often uses Horizontal Mr. Dolphin in corner pressure. You can use this against her by jumping over the dolphin (particularly the slow HS version) on reaction, which will put May in the corner and you in an ideal position to begin corner pressure of your own.

May's jump-ins are not disjoint and can easily be challenged with 6P or other anti-air disjoints, especially once May has used up her second jump or airdash and her jump trajectory is set. May will often try to bait anti-airs with late second jumps, so be patient and wait for May to commit before going for an anti-air. May's j.D has a lot of recovery, so even if she uses it to avoid 6P, she will not be able to punish the whiff.

You can escape from counterhit S Horizontal Dolphin's stagger in time to jump out of a follow-up Overhead Kiss. Practice the stagger event to consistently get a perfect press (you'll see a solid gold button) and avoid one of May's biggest punishes!

Without 50 meter, May doesn't have many defensive options. If you can pressure her in this situation, keep it up and press your advantage!