Each attack in the game has an attribute. Attributes are broken up into three broad categories: strike, projectile, and throw. These attributes interact with each other to trigger certain effects like Crush and Throw Break.

Strike Attribute
Strike attacks are the most common in the game, and include any non-throw attack that's part of the character, such as punches, kicks, headbutts, and sword swings.
Strikes can clash or crush other strikes.

Anre's Rakshasa, have the ability to pierce through and cancel out projectiles regardless of how strong they are.

Throw Attribute
Throws are attacks that can not be blocked, but are short range and have other restrictions.
Grounded throws cannot grab airborne opponents - in the same way, aerial throws cannot grab grounded opponents.
Certain special moves, such as

Vaseraga's medium Great Scythe Grynoth, are designated "anti-air throws", and thus are the only throws that can grab airborne opponents.
On hit, throws cause both characters to become temporarily invincible to other attacks while an attack animation plays out.

Multi-Attribute Strikes
Some strikes actually have attributes from other categories, like Strike-Projectile.
A common instance of this is strikes can interact with projectiles and take on the properties of both.
For example, the first hit of

Assist Characters
Some attacks actually call out a friend to attack for you, such as

Lowain's Sammy & Tommy.
In practice, these attacks are very similar to projectiles, with the main difference being you can hit them with strikes, and they don't clash with other projectiles.

Invincibily and Armor effects both protect you from getting hit, but the difference is in the details:

Invincibilty
Your attack is completely invincible to attacks for a set period of time. The opponent's attacks will simply not hit you during this time.
A message saying "Invincible!" will appear on the corresponding player's side when an invincible option is performed.
Armor
Your attack will absorb one hit for a set period of time. This means the opponent's attack will hit you, so the opponent can still special cancel their attack as if you blocked it.
Attacks still deal damage when connecting - you can still be KO'd when in an armored state!

These effects do not protect you against all attacks, as certain attacks only have invincibility or armor against certain Attack Types. For example, Evade is invincible to Strikes and Projectiles, but completely vulnerable to throws.

Most attacks in the game deal standardized amounts of hitstun, blockstun, etc. depending on their Attack Level. Note that some moves override these default values, which will be noted in the frame data. In addition to these exceptions, some attacks knock the enemy into the air, wallbounce, crumple, etc.

As a rule of thumb, each attack's clash level equals their Attack Level. Exceptions to this rule will be noted in the frame data. 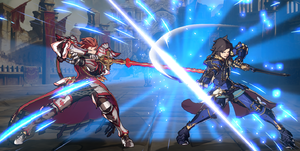 These two attacks have the same clash level

Clashes occur when two strikes with the same clash level hit each other at the same time. During a clash each player can cancel into almost any attack, run, Evade, or Cross-Over, and each player also gains 10% Skybound Gauge!

Because of the unpredictable nature of clashes, they are often difficult to take advantage of, but some players understand how the attack interact well enough to intentionally cause a clash to cancel out the opponent's attack, then retaliate with their own! 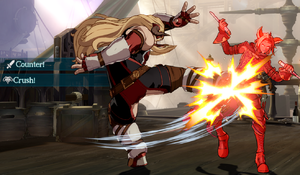 Your attack out-prioritized the opponent's

A Crush occurs when two strike's with the different clash levels intersect. You will see the word "Crush!" appear on the HUD. This means that one attack beat the other, commonly known as having higher priority.

Gran's Rising Sword, or most Skybound Arts will Crush all non-invincible attacks, and might even crush each other depending on the moves involved.

You might think that thanks to the Clash and Crush systems, it is impossible for two strikes to trade (aka both characters get hit), but this is not true! Trades are still possible, just fairly rare.

Remember, Clash and Crush only occur when two attack's hitboxes intersect. If you can have two attack's hit each other's hurtboxes without touching attackboxes, you can make a trade, regardless of level!

One attack can hit multiple targets assuming they are within range, such as

Projectiles interacting with Assists is a bit tricky - for example, Lowain's bros can absorb one hit of a projectile, so you can use them as a shield. Lowain's Magnificent Tool of Destruction can not do the same however; projectiles will hit the Katapillar and continue unaffected.

Counter Hit
This occurs when hitting the opponent during the startup or active frames of their attack. Certain attacks are even in counter hit state during their recovery, like Evade (4G)! The opponent will flash red and the HUD will display Counter when this happens.
Certain attacks have unique effects on counter hit, for example Katalina's M Enchanted Lands (214M) causes wallbounce only on counter hit.
Forcing air state
There are lots of moves that force the airborne state in some way or another, meaning they behave the same regardless of whether they hit someone grounded or airborne. They typically come in two forms

Wallbounce
Bounces the opponent off the wall in the corner, allowing you to extend your combo.
Hard Knockdown
Disables ground recovery on hit, forcing the opponent to wake up in place - this is typically a very opportune time to perform okizeme.
Guard Break
This is a unique effect that occurs on block. The defender is are stuck in a reeling animation and can not block. Depending on the attack, you can even start a combo on Guard Break.
Crumple
Forces the opponent to their knees for an extended animation that can be combo'd into.

Each character's full Frame Data page shows both the frame advantage when an attack is blocked as well as on hit. Air attacks don't have frame advantage listed since that value is heavily influenced by when the attacker lands after an attack.

Frame advantage assumes that the attack connects as soon as possible against a standing/crouching opponent, and that the attacker does not cancel the attack into anything else. Hitting an attack later into its active frames is called making the move "meaty".

When an attack hits an object, both objects freeze in place briefly to give the attack the feeling of more impact. This effect is known as hitstop and can vary in duration, like a f.L compared to a c.H. Hitstop helps with combo consistency because you can buffer commands like special cancels during hitstop and it will be executed immediately after hitstop ends. Characters with charge moves, like

Charlotta's Shining Onslaught also have the added benefit of getting more time to charge those attacks.

Hitstop applies to anything that can attack or get hit - including projectiles, but excluding assist characters.

Moves with armor absorb an oncoming attack before attempting to retaliate with their own. Some armored moves can beat safe jumps; they force the attacker into enough uneven hitstop that the defender can attack before the attacker can reach the ground and guard.

Seox's Thunderflash also put the opponent in uneven hitstop, providing a similar interaction to armoured moves. These parries achieve this by freezing the opponent when the parry is triggered, and having the counter-attack connect before standard play resumes.

Lowain's Come at Me, Bro! is the exception, as the opponent has time to spotdodge before the counter-attack connects. This is also true for

Vaseraga's Aftermath, which has a Guard Point at the start.