From Dustloop Wiki
< DNFD
Jump to navigation Jump to search

As with other 2D fighters, DNF Duel uses Numpad Notation.

MP Skills can use more then one directional input.

The most basic movement option. The character approaches or retreats from the opponent slowly.

Put the character in a crouching position, lowering their hurtboxes. Note that the hurtboxes don't shrink immediately; the character can still be hit by moves normally whiffing on crouchers until they actually crouch.

Dashes move the character forward at a greater speed than walking. Holding the second

will continue dashing as a forward run.

Backdashes move the character back a preset distance.

Makes the character jump into the air. Pressing

will have them jump backward or forward respectively.

Kunoichi
Jump again while in the air. Pressing

performs an attack, ranging all the way from simple punches to huge weapon swings. Normals form the core of every character's offense and are often cancelled into Skills and MP Skills to create damaging combos.

In order to perform a grab, input

to throw them backwards. 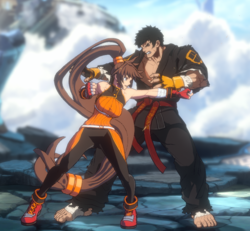 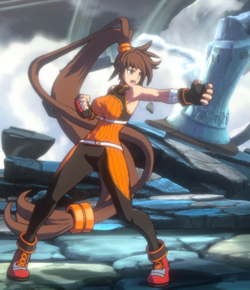 Throws are strong tools against opponents who have been conditioned into blocking for too long, as they cannot be blocked. However, using a throw while out of range, against an opponent in the air, or against a temporarily throw invulnerable opponent triggers a vulnerable whiff animation.

In order to perform a tech grab, input

as the opponent initiates a grab.

When two characters attempt to throw each other at close to or exactly the same time, a throw tech will occur, pushing both characters away from each other.

). Skills function in a variety of ways depending on the character. Some skills function closer to normals while others have special properties. In general (with many exceptions), Skills follow these basic guidelines:

). Each MP Skill costs varying amounts of MP to use and pauses natural MP regeneration briefly when used. They can still be used without enough MP in stock as long as a character has at least 1 MP remaining, but this puts the character in Exhaustion until the MP deficit is recovered.

Most MP Skills can also be input with a "technical" full motion e.g.

can also be input with

. A very powerful attack that can only be used once a round, and only after a character activates Awakening. While it deals high damage, it has no invulnerability and using it turns off that character's Awakening Effect for the rest of the round.

when the character has any amount of White Damage. This consumes all white damage remaining plus an extra 5% of max health to cancel the character's current action and return them to a neutral state while restoring MP based on the amount of health consumed.

to Standing Guard and hold

. This moves characters forward while avoiding attacks, but is vulnerable to throws (with the exception of

Enchantress) and for a short period of time at the end of the movement.

while blocking. An invincible attack that launches the opponent away on hit. It costs 100 MP and cannot be performed without at least 100 MP.

A special powered-up state that automatically activates when characters reach 30% health or less, visually indicated by the larger section at the end of the health bars. This activates your character's Awakening Effect and enables the use of their Awakening Skill. Healing white health back above the Awakening threshold does not disable Awakening.

When characters are struck by most attacks, a portion of the damage is dealt as White Damage distinctly visible on the HP Gauge. Characters cannot be K.O.'d from this white damage as long as real health is remaining, and recover it (i.e. turn it back into "real" HP) slowly over time after not taking any damage for a brief period. MP Skills deal all of their damage as real health damage and deplete all white damage on hit.

A temporary negative state that occurs if a character uses an MP Skill with exactly or less than the skill's MP cost available, pushing the MP Gauge to 0 or into an invisible negative amount. MP Skills are not usable while exhausted, and remain unavailable until MP recovers above 0, either naturally over time or by using Conversion.