As you combo the opponent, you will notice that each attack does less damage than they would individually. This is due to damage scaling, otherwise known as damage proration. Each attack has an Initial Proration value and how many "steps" it proceeds down the scaling table.

The first hit of the combo will always do 100% damage, and unless stated otherwise, all attacks have a minimum damage of 10%. To determine how much damage the second hit onwards in a combo will deal, there is a formula:

Here's how the scaling table looks like for all Initial Prorations from 100% to 50%:

Notice that at 100% Initial Proration, the table benefits the most from damage scaling and damage also never goes below 15%. Thus moves with 100%+1 or even 100%+0 proration are the best combo starters.

Here's an example to get the hang of combo scaling: Start with

Depending on the move, each part of the attack can apply scaling individually or together as one hit. For example,

There are 6 sources of damage boost in the game: Sparking!, Limit-Breaking Power,

†Only applies to Android 21 (Lab Coat)'s Special Moves and damage she deals as an Assist.

There are 2 sources of damage reduction in the game: Super Scaling and

Without any damage debuffs, all attacks with damage higher than 0 cannot drop below 1 damage. With debuffs, attacks can be scaled to 0 damage.

Landing a hit with a Super or Meteor Attack will mark the combo with Super Scaling. Once the current point character returns to neutral state, the rest of the combo will suffer a 40% damage multiplier.

Certain Super/Meteor Attacks do not have this property, allowing you to freely combo afterward with normal damage output. One caveat is that if Super Scaling has already been marked before these attacks, follow-ups will still suffer reduced damage once the point character has fully recovered. Example:

Guard:
AllStartup:
12Recovery:
Advantage:
-24 (when held, does not have Super Scaling), after Nappa returns to neutral state, the rest of the combo will do 40% damage.

Full list of Supers/Meteors without Super Scaling property is as follows:

The combo system in Dragon Ball FighterZ is very freeform, however there are a few rules that limit things.

Moves that cause the camera to briefly change angles and zoom in are considered to have the Smash! property, which puts the opponent in an extended hitstun state compared to normal. These often cause a special hit property, such as launching, wall bouncing or sliding the opponent, although this is not always the case.

Attacks that can trigger Smash! property do not trigger these effects at all times, as certain circumstances can prevent the camera change and the effect from taking place. Typically, you are limited to one Smash! per combo, with the following exceptions:

Certain moves ignore this decay, such as most throws and Super/Meteor Attacks.

When blocking specials and supers a very small percentage of the attack's base damage will be dealt in the form of recoverable health. This is colloquially known as chip damage (i.e. chipping away an the opponent's health). Some attacks do a significant amount of chip damage, like Krillin's Destructo Disc.

Normals and regular Ki blasts do not perform chip damage.

A character will not die from chip damage. 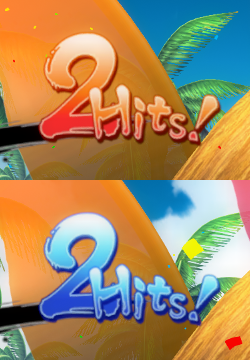 A valid combo versus an invalid combo. The number turns blue when the combo could have been escaped

Because characters can choose to delay their air recovery, this leads to the possibility of combos that work only because the opponent decided not to recover. This means that some combos are not "true" combos; the game's HUD differentiates between the two classes of combos by showing the hit counter as red for a valid combo and blue for an invalid combo.

There are some situations on defense where you intentionally delay a recovery to avoid a mix-up. For example, some characters often create mix-ups assuming you will recover right away. Delaying your recovery will mess up their timing and allow you the chance to escape.