When blocking an attack, your character will be stuck in a state where you can not move, severely limiting your options. The amount of time you are locked into a blocking state called blockstun. Different attacks deal different amounts of blockstun, and can be affected by other factors. 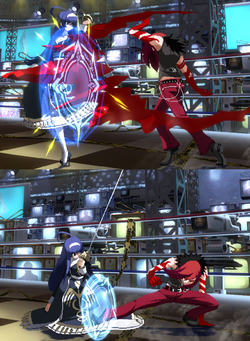 to block low attacks. Mid attacks can be blocked in any direction. Note that you should always hold

with respect to the direction of opponent's main character.

As a general rule for ground blocking:

Due to the nature of this game, you will probably face a left/right mixup (especially in Cross Combo). In this case watch out for the "Change!" and fastly change the blocking direction. There is no indicator if you block left/right incorrectly, you will just get hit.

Because there are relatively few grounded overheads in BBTAG, it's best to block low and react to jumps or the start-up of Clash Assaults. Not all jump attacks are overheads, however; Be sure to check each character's wiki page for details. 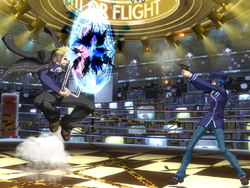 Hold any backward direction while in the air to block. There is no high-low blocking in the air, making it a common place for defenders to go to avoid blocking ground-based high/low/throw mixup. That's not to say that being airborne is a fail-safe defensive posture: going airborne is a risk since jumps have a lot of vulnerability on start-up and you need to deal with cross-ups and cross-unders. Air blocking has 2 more frames of blockstun compared to normal blocking.

Some attacks are unblockable (in certain circumstances or completely), meaning the only way to avoid getting hit is to move out of the way! For example, Makoto's Sirius Jolt(236C) is high ground unblockable (if you're not in blockstun) and Hakumen's Yukikaze is fully unblockable if triggered.

Ground Reversal Actions normally cannot be blocked in the air (even if you're in blockstun), you will see a blue exclamation mark if you attempt to air block one. However these attacks can be blocked under certain circumstances:

There is also a class of unblockable attacks that exist because the opponent and their partner hit you with a high and low attack at the same time. Because you can not block high and low simultaneously, you are guaranteed to get hit. There is no icon to show when this happens, though you will see an exclamation mark showing that you blocked "incorrectly". For example, Nine use Morganite of Malice (1st hit whiff) and do a j.B to make a high-low unblockable.
High-low unblockables are rare and do not exist outside of certain set-ups, which most of the time can be escaped using Reject Guard. However if assists are involved then the mixup could be very tricky to react to. 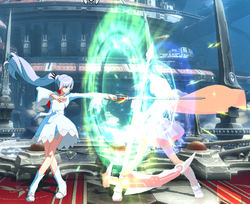 While blocking an attack, hold

to Reject Guard. Reject Guard will push the opponent away from you. Reject Guard costs 1 Skill Gauge, but when strategically used, it can bring a quick end to your opponent's offensive pressure by pushing them to a distance where it would be very difficult to continue pressure.

After Reject Guarding an attack, you will recover in 16 frames. The Skill Gauge will be in cooldown for 300F. So it is not the best idea to constantly use these, especially if you're low in resources.

Intelligent use of Reject Guard can be used to create opening in the opponent's offense for you to punish the opponent or to prevent the opponent from setting up scary mixups, but carries it's own risk

If you repeatedly guard attacks for 300 frames, with any gaps in blockstun being 30 frames or less, you will begin gaining Skill Gauge at double the rate of normal. You do not have to be guarding during the gaps, as long as you continue to successfully guard each subsequent attack. 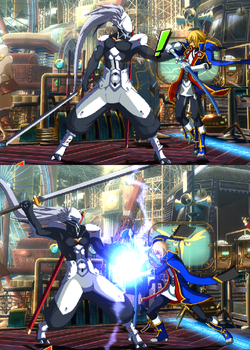 A green exclamation mark will appear when a character can break a throw. Press

to break the throw and escape. The throw escape window is 14 frames. 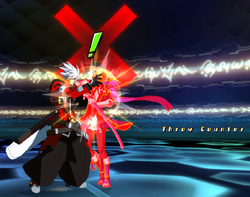 This happens when you are thrown while in a Counter Hit state, preventing you from attempting a Throw Escape. For example, getting thrown out of an attack with a lot of start-up. Your character will glow red, a red X will appear over the exclamation mark and the words "Throw Counter" will appear on the side of the screen. 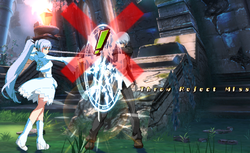 After inputting a Reject Guard or Throw Escape (or pressing

during any other action), you will be locked out of Throw Escaping for a while. If you get thrown during this lockout period, a red X will appear over the exclamation mark and the words "Throw Reject Miss" will appear on the side of the screen. TRM state lasts for 30 frames after a Reject Guard/Throw Escape attempt.

Tricking the opponent into attempting a Throw Escape or Reject Guard early, then actually throwing them is a common offensive technique in high-level play. 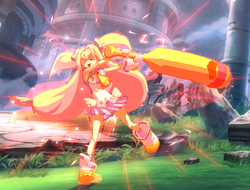 Invulnerable attack! Any punish to this is un-burstable

to make your character perform a Reversal Action, a fully invulnerable attack functioning much like a Street Fighter-style Shoryuken or a counter like Hakumen from BlazBlue. This varies from character to character, but they are all mostly used for the same purpose: to stop the opponent's offensive momentum.

. This carries its own risk since if you don't press

fast enough, you will get hit by the opponent's attack.

You can NOT use Active Partner Skills during the Reversal Action. 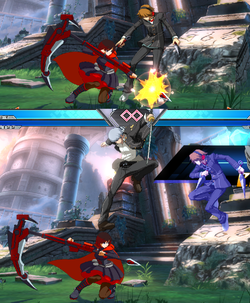 You can do this while blocking or getting hit

While blocking or being hit, press

to have your partner do their incoming attack to break the combo and become the point character. Cross Burst costs 100% of your Cross Gauge to activate and deals 1000 damage. Using it can save your character from losing a lot of health and possibly dying when they're in a bad situation. Be warned that your incoming character is neither fully invulnerable nor safe on block, so try not to Burst at points where the opponent can readily cancel into an attack with head attribute invulnerability or block and punish.

This means Cross Burst is disabled

Cross Bursts can be temporarily locked out during the following conditions:

The Cross Gauge will be crossed out during these situations.

Due to there being several button combination actions in the game, it's possible to press three or even four buttons simultaneously to layer various options depending on the opponent's action. These option selects are often performed at a timing when you expect the opponent to have done something, and can help defuse more basic mixup or staredown situations where a throw attempt is possible but not guaranteed.