Jin is a Major in the NOL and one of its elite commanding officers. While known for his cool and calm demeanor, he is also jealous, ambitious, and possessive with little care for others, treating them like they are mere obstacles. He displayed formidable combat prowess during the Ikaruga Civil War, which earned him his rank as Major and the title "Hero of Ikagura." When he heard that Ragna the Bloodedge was on the move, he quickly abandoned his post to hunt him down by himself. 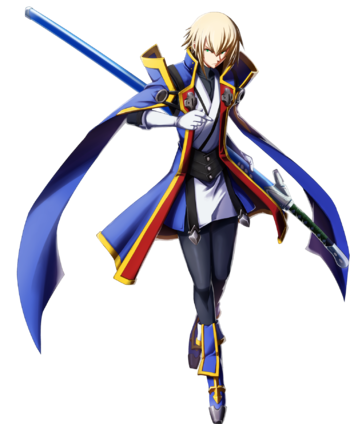 Moves that can freeze have two additional values: Freeze Count and Freeze Duration

Jin has access to a set of special moves that consume 25% Heat, similar to Force Breaks from Guilty Gear AC, EX attacks from Street Fighter 4, and SB Skills from Persona 4 Arena.

Standard jab. Whiffs on crouching opponents except those with large crouching hit-boxes, such as Tager and Relius. Can be used as an anti-air against late/weak jump-ins. Jump-cancellable on hit and block.

A two-hit move. Both hits have a slight vacuum effect. It has good reach and quick a start-up, making it a common combo starter. Leads to your basic high-low mix-up, since it gatlings into 2B and 6A on the first hit, or it can be used to frame trap, set-up throws, etc. Can be jump-cancelled on hit only.

A strong zoning and neutral tool. One of Jin's best pokes. It has a pretty quick start-up, particularly for its range. Use it as a frame trap or to fish for CHs in neutral. Jump-cancellable on hit and block.

A relatively slow jab but it has decent reach and typically leaves Jin safe on block. Mostly used for stagger pressure and sometimes as a situational anti-air, as Jin's hitbox shrinks quite a bit when peforming 2A, allowing him to low-profile some air attacks. Jump-cancellable on hit and block.

Hits low. Two frames slower than 2A, but 2B has more range and is a better starter; in return, it has more recovery than 2A. Can be used to reset pressure from time to time.

It has a huge vertical hit-box but it has significant start-up and recovery. Can be used as an effective frame trap since it can be jump-cancelled on hit and block. As an anti-air, 2C is slower than some of Jin's other options, but it has a lengthy period of head invuln and great vertical range, making it useful against certain air approaches; however, 2C can be beaten by quick attacks due to its start-up. Head invuln begins well before active frames and extends through them.

Extremely quick overhead, but it can only be followed up if it lands as a counter-hit or with 25-50 Heat. 2A, 5A, and 5B are the only moves that gatling into 6A, so beware becoming predictable in your strings: Jin's 6A is an excellent tool that's difficult to block due to its speed and animation, but opponents aware of your gatling options will block 6A easily if you simply cancel into it at obvious points. Very unsafe on block. Beware using this move without 50 Heat for a Rapid Cancel.

Invulnerable to lows early in its start-up, but it's pretty slow. 6B is positive on block so it can be used to reset pressure from time to time if your opponent is respecting and to situationally beat 2A mash.

It has a pretty good vertical hit-box, so it can be used as a situational anti-air in the corner, though it lacks head invuln. Other than that, this move is mostly used as combo filler or as a high-risk frame trap. One of Jin's strongest combo starters.

Jin's sweep. It has decent reach and start-up but it's punishable on block if you don't special cancel it. It can also be used to low profile under certain moves, such as Ragna's 5B at max range. Combo tool.

A standard air jab. Hits high. Mostly used as an air-to-air. Jin's fastest air normal, but it has the least range.

Pretty versatile move: it can be used as a jump-in, for cross-ups, etc. During the latter active frames, the hitbox extends fully. Capable of hitting above, in front of, below, and behind Jin at certain frames.

Another great zoning/neutral move. Mostly used as an air-to-air and to control space while fishing for CHs. Be careful not to be too predictable with this as most characters have at least one move that can low profile j.C. Can be jump-cancelled on hit and block.

Another versatile move, as it hits all around Jin. Primarily used as a jump-in due to its hit-box; unlike j.C, j.2C has a stronger vertical hitbox, whereas j.C has a superior horizontal p one. Can be jump-cancelled on hit and block.

It has a massive hit-box which makes this a good poking tool but it's relatively slow and has quite a bit of recovery. Can be special canceled.

Pretty good hit-box and range but if you whiff this you're guaranteed to get punished. It has a bit of frame advantage so it can be used to reset pressure from time to time. Can be special canceled. Can be jump canceled on hit only.

It has a pretty decent hit-box but it has a ridiculously slow start-up. It's positive on block so it can be used to reset pressure from time to time.

It hits all around Jin so it can be used as a high-risk cross-up with an IAD. Mostly used as combo filler.

The charged version has a lot of frame advantage but it's pretty slow. You'll rarely ever use this move as there are better things to spend your meter on.

This move can be used to bait and punish anti-airs since it has recoil that makes Jin float a bit as he fires it.

Your go-to reversal, being a VS starter, you can only confirm it into 3C > 214B~C mid-screen. The 2nd hit becomes unblockable if you charge it long enough.

Can be used to punish projectile zoners if you get a read on them but other than that, this move is primarily used as combo filler.

You can use this move as an overhead if you use it immediately off the ground with a TK motion. Other than that, it can be used to extend air combos.

Switcheroo in the corner.

As every other air throw, this acts a pretty decent air to air.

Uses 5C's animation frames, and as every other CA, it's punishable on whiff and block.

This move is actually pretty decent if you use it after the opponent is frozen. This move counts as a special, so you can cancel most normals into this move.

Primarily used to zone and annoy your opponents. It makes the opponent float and eventually knocks them down on CH, so you can combo into this move if you're close enough and begin your offense on your opponent after the knockdown.

It has a ridiculously large hit-box for its quick start-up, which makes this a pretty decent anti-air, but it's extremely negative on block. While a DP, this one is primarily an anti-air tool rather than a reversal -- Fubuki lacks full-body invincibility but is head invincible beginning frame 5. Thanks to its speed, hitbox, and head invuln frames, it works well as an anti-air, particularly for covering specific angles taken by opponents and against very fast air attacks that can't be answered with 2C. Just make sure the move is at least blocked: on whiff, Jin is vulnerable to a massive punish combo due to the move's lengthy recovery, while on block, you retain the option of Rapid Cancelling to remain safe.

This reversal is ridiculously slow and punishable on block or whiff. Most characters have an option select to use against it, so use it with caution after wake-up.

The infamous "Ice Car", using it during neutral is asking for trouble. 2nd hit floats the opponent after a 3C, so it can be used as a combo finisher.

Pretty good hit-box and the recoil causes Jin to float a bit which makes this a decent air to ground and useful for baiting and punishing certain anti-airs.

Now a FC, use it to punish highly punishable moves. You must be close to the opponent in order to trigger this move, otherwise Jin will go into a whiff animation which is punishable. Can be canceled into the follow-up with 25 Heat.

The 22C follow-up is useful for switching sides with your opponent mid-combo in the corner.

It can catch people off guard or pushing buttons from time to time during neutral. Pretty useful against projectile zoners. Definitely not a super you want to use up close, as it has, albeit small, a minimum distance to hit.

Your go-to combo finisher when you need to add extra damage to a combo.

Situational counter reversal that catches both highs and lows, can be effective when used in certain situations or against certain moves.

You'll really only use this move if you're paired up with a sandbag since Jin needs all the meter he can get. If you must... it combos from ground throws.