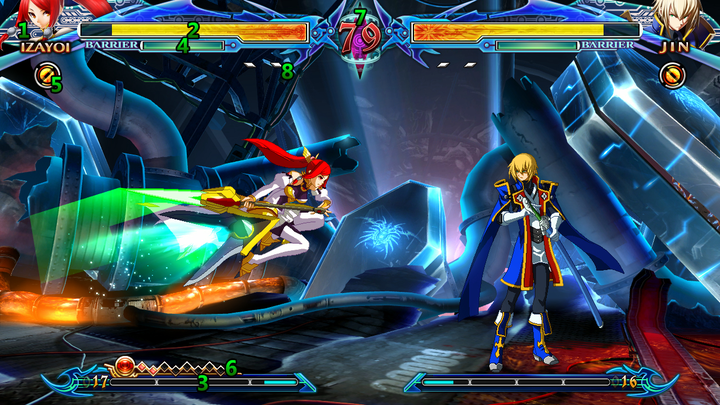 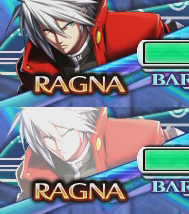 Here is the character's Heat Gauge. When you hit the opponent, take damage, Block and Instant Block attacks, your Heat Gauge will fill, when the gauge fills to certain amounts, you can perform actions that require heat such as Distortion Drive, Crush Trigger, and Counter Assault.

Here is the character's Barrier Gauge, when using Barrier, you are provided added push-back when blocking attacks at the cost of 1 extra frame of block stun and the gradual depletion of your Barrier Gauge. When your Barrier Gauge depletes, you are put in Danger State and cannot use Barrier Block until the gauge refills to half full.

Your Burst Gauge. Consume a full Burst Gauge to perform Bursts and Overdrive.

If a character has any mechanic that requires their own gauge, this is where that gauge will appear (ex. Arakune's Curse Gauge, Relius' Ignis Gauge, Tager's Spark Bolt, etc), refer to the individual character's page to know what gauges they have and their requirements.

On default setting, every match is a best 2 out of 3 rounds, a player has to be the sole victor 2 rounds to be winner of the match. When you win a round, one dot below the timer will be covered by a red diamond icon, this shows you won a round. If both dots are covered with the red diamond icons, then you have won the match.